Good news! Some of our vetted, moderate Syrian allies have defected to al-Qaeda!

I swear, our foreign policy would be turning out better results if it were run by the Keystone Cops. Via Patrick Poole at PJM, while some have just surrendered to al Qaeda, others have switched sides. Oh, and handed over he weapons we gave them. What was it bin Laden said about people preferring the strong horse?

Two of the main rebel groups receiving weapons from the United States to fight both the regime and jihadist groups in Syria have surrendered to al-Qaeda.

The US and its allies were relying on Harakat Hazm and the Syrian Revolutionary Front to become part of a ground force that would attack the Islamic State of Iraq and the Levant (Isil).

For the last six months the Hazm movement, and the SRF through them, had been receiving heavy weapons from the US-led coalition, including GRAD rockets and TOW anti-tank missiles.

But on Saturday night Harakat Hazm surrendered military bases and weapons supplies to Jabhat al-Nusra, when the al-Qaeda affiliate in Syria stormed villages they controlled in northern Idlib province.

The development came a day after Jabhat al-Nusra dealt a final blow to the SRF, storming and capturing Deir Sinbal, home town of the group’s leader Jamal Marouf.

Remember, these were among the guys we were counting on to fight ISIS. That’s some vetting job we did there.

Read the rest of Poole’s report for information on a growing rapprochement between ISIS and al Qaeda, which would reunite the two branches of our deadly enemy. Between this and the desultory, micromanaged air campaign ordered by a diffident president who’d much rather be golfing, the self-proclaimed Caliphate and their al-Nusra besties should be marching into Baghdad and Damascus by New Year’s.

We’re in the best of hands.

UPDATE: Michael Totten, who knows the Mideast better than you and I ever will, says Syria is gone.


How we shoot ourselves in the foot through the punitive taxation of capital gains. In the end, it hurts working people.

According to the bean counters at Ernst and Young, the United States has one of the highest capital gains tax rates in the world. 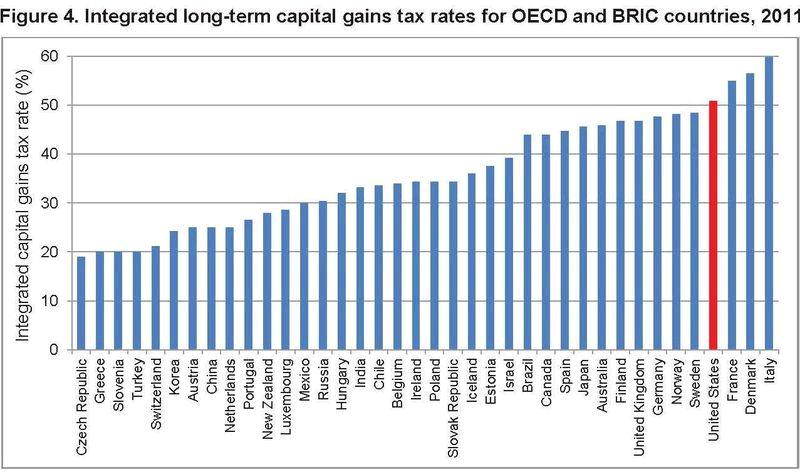 But if you don’t trust the numbers from a big accounting firm, then you can peruse a study from the pro-tax Organization for Economic Cooperation and Development that reaches the same conclusion.

But does this really matter? Is the United States harmed by having a high tax rate?

And this remarkable chart shows that workers are victimized when there is less investment.

Let’s add to all this evidence.

Jason Clemens, Charles Lammam, and Matthew Lo have produced a thorough study for the Fraser Institute about the economic impact of capital gains taxation.

Comments Off on The Overwhelming Case against Capital Gains Taxation |

“A Criminal Organization Masquerading As A Political Party” Part 7,692


Your right to a secret ballot is sacred, and the New York Democratic Party will be watching you to make sure you use it. Or else? Yeesh.

The Democrat party has been accused of being “a criminal organization masquerading as a political party”but the New York Democrat party in recent days has taken the party’s mob-like tendencies to a new extreme.

I think the Democrats just threatened me: pic.twitter.com/wGvYInosk5

Democrats are telling voters that they had better head to the polls — or else.

The New York State Democratic Committee is bullying people into voting next week with intimidating letters warning that it can easily find out which slackers fail to cast a ballot next Tuesday.

“Who you vote for is your secret. But whether or not you vote is public record,” the letter says.

“We will be reviewing voting records . . . to determine whether you joined your neighbors who voted in 2014.”

Comments Off on “A Criminal Organization Masquerading As A Political Party” Part 7,692 |